This featured microbe is Escherichia coli. Escherichia coli or best known as E. coli, is a Gram-negative, rod-shaped bacterium found in great abundance in the lower gastrointestinal tract, specifically the mucosal surface of the rectum. Cattle populations are known reservoirs for certain pathogenic E. coli, and are typically asymptomatic carriers of the organism. However, most strains of E. coli are not harmful but are part of the normal bacterial communities of the gut. Image courtesy of The Aberdeen-Angus Cattle Society 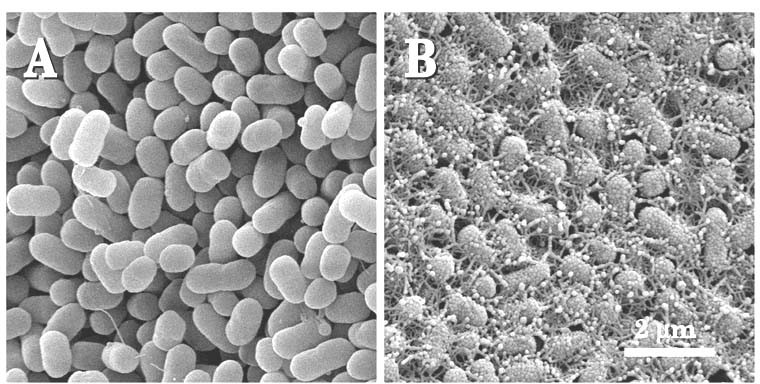 ​Certain strains of Escherichia coli are pathogenic, such as O157:H7. This strain produces toxins that can be a cause of food-borne illness through consumption of contaminated food (e.g. undercooked ground beef). Image courtesy of USDA

Cattle are major reservoirs for Escherichia coli O157. It is not in great abundance in the rumen but the asymptomatic colonization by E. coli O157 in the lower gut of cattle can be associated with diet. Many studies have revealed that wet distiller’s grain diets have a higher prevalence of E. coli O157. Image courtesy of Liquid Feeds

Recent studies suggested that E. coli O157:H7 has an unusual tolerance against some environmental stresses, such as acidic and dry conditions, compared with other types of E. coli. Image courtesy of Extension

Since the gastrointestinal tract of cattle is an identified reservoir of this pathogen, contamination of food and water by bovine feces is the most common route of transmitting E. coli O157:H7 to humans. Image courtesy of NEOGEN Europe